Ottawa, Canada, August 8, 2016 – A recent survey conducted on behalf of the Canadian Association of Optometrists found that parents rank child eye health as one of their lowest health priorities, with only 25 per cent choosing it as one of their top three concerns.

“It is particularly concerning because eye health is such an important part of a child’s overall health and development,” says Dr. Barry Thienes, president of the Canadian Association of Optometrists.

“Eighty per cent of a child’s learning is based on vision,” says Dr. Thienes. “Undetected and untreated vision problems often cause reading difficulties, and can elicit some of the very same signs and symptoms that are commonly attributed to issues such as ADHD, dyslexia, and speech problems.”

The National Coalition for Vision Health estimates that one in four school-age children has a vision problem[1], yet fewer than 14 per cent of children in Canada under the age of six have had a comprehensive eye exam. [2]

Many children participate in vision screening or sight test programs at school, which some parents misconstrue as a comprehensive eye exam.

“These tests are limited and cannot be used to diagnose a vision or eye health problem,” says Dr. Thienes. “Studies have shown that vision screening tests have high error rates, with 43 per cent of children able to pass who actually have a problem.” [3]

Eye exams performed by optometrists are not only important for charting a child’s eye health and ensuring they have the visual skills necessary for learning and development. They are also key to overall health maintenance.

“During an eye exam we are also looking at the structural development of the eye and identifying any underlying health conditions that may be present,” says Dr. Thienes.

Retinoblastoma, the most common type of eye cancer in children, accounting for approximately three per cent of all cancers that occur in children younger than 15 years of age[4], may show signs as early as six to nine months old. Optometrists also play a role in monitoring children with diabetes, one of the most common chronic diseases among children and youth in Canada. Optometrists look for telltale signs of retinopathy, which damages the small blood vessels in the retina.

“Bottom line, regular eye exams by a doctor of optometry play an essential role in maintaining your child’s overall health and ensuring they don’t have a vision problem that is affecting their learning and development,” says Dr. Thienes.

The Canadian Association of Optometrists recommends infants have their first eye examination between six and nine months of age, another between ages two and five, and annually thereafter to ensure optimal vision and development.

About Doctors of Optometry

Ancora © 2016 All Rights Reserved Terms of Use and Privacy Policy
You can login using your social profile
Problem with login?
An important message to our patients

For over 30 years, successive Ontario governments have ignored Optometrists.  In 1989 the fee paid for an OHIP insured eye exam was $39.15, today, over 32 years later, it is on average $44.65.  This has not kept up with inflation and does not come close to covering the cost.   Every time we perform an OHIP insured eye exam we do so at a loss.  This is not sustainable. 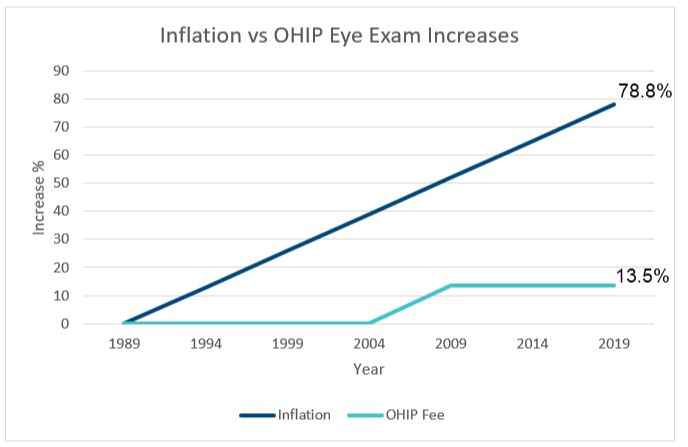 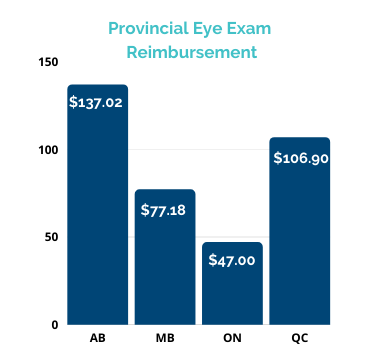 ONTARIO IS THE LOWEST PAID IN CANADA

Our fees would have to increase by over 60% to reach the next lowest province. The bar graph here compares Ontario to other provinces that fully fund eye care.

You may have read the government has offered us an 8.48% increase in our fees. For a senior’s eye exam that would raise our fee to $51.00. While that seems generous, it still leaves us more than 30% lower than Manitoba, the next lowest paid province, while Ontario having one of the highest costs of living in Canada. Unfortunately, an 8.48% increase does not make up for 32 years of neglect.  We need the government to prioritize and properly fund eye care to make it sustainable for years to come.

How can you help?

Please understand that we want this issue resolved permanently so that we can continue to provide the same high level of care that we’ve always provided for your eyes and vision.

We ask that you please treat our staff with kindness and understanding during this time.